The Store (or Lady, get yer hand off my bum)

For the first time in weeks I went to the store and got a cart.  For months now, when I went shopping I only needed a basket.  Because I earned new respect from the creditors banging on my phone and I got real money from the ex, I could really go  grocery shopping.

It wasn’t nearly enough money but it was still plenty for me to need my old buddy The Cart.  I was ready.  I had bags.  I had gas in the car.  I had money. I had a list.

First thing that went amiss was that the stylish black sweats and lime green sweatshirt did not have pockets for my phone.  I just stuck it in the bottomless pit that is my purse.  Fixed that one pretty quickly.

Got to Superstore and promptly beat out 2 other cars for a prime parking spot.  I smiled and waved at them as I turned into the space.  I ignored the hand gestures they were making, mostly because I had no interest in checking out their manicure, even if it was only on one finger.  I had to shop and there was no time for such things.

Realized I forgot my bags.  Ah well.  I dug in my purse for a loonie as that is the deposit required for the state of the art carts at the store.  Found a note in the change compartment of my wallet.  “Mom, I took 4 loonies Love Carly”  Crap. 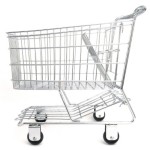 So I grabbed a basket.  Filled it up pretty fast.  I was bent over in the aisle of all-that- is-Asian when someone bumped into me.  Hard.  That cheek has had something wrong with it for a few months now.  So when it gets bumped I usually yelp.  Pretty loud too.  I tried to stand up straight (just so I could rub my bum) when the elderly woman who bumped into me approached me fast.  She was obviously horrified by the noise I was making.  I tried to assure her that I would be okay but ya know it was like I  knew  what was coming!  Sure enough, she reached out and put her hand. on. my. bum.  It made me shut up and it made all the people around me take notice too.  She kept saying, “you poor dear” as she rubbed gently on my backside.  I actually had to tell her to remove her hand from my person.  She kind of laughed as she seemed to realize what she was doing and tottered off in search of more victims.  I carefully bent down again to pick up my full basket (no cracks about that) (oh gosh that was a good one too!) and noticed on the way down a boy about 10 looking at me and laughing.  His momma was too.  Soy sauce could wait.  Next aisle please.

I filled that basket then realized just how crowded the store was.  It was no tax all day. And Sunday.   Line ups galore and all the check-outs were open.  I parked myself and my heavy basket in a line, realizing after a minute who was ahead of me.  Yep. the bum rubbing (rubber?) maniac with her cart.

I thought it best to move before she saw me.  I found another line that was just as long.  As I inched forward I realized I had  forgotten many things that were on my list.  I guess I should have looked at it.  It was tucked it into my sleeve because I didn’t have any pockets (where is that phone?) and my purse would swallow it.  AND I didn’t have a cart.  Well, I was NOT going to leave this line.  I figured I could just stop somewhere else and get those things.  Made it though the line and paid cash.  HMM, note to self:  a loonie in my change.

Got to the car and dumped everything in the backseat.  My trunk is already full of crap.  Looks like I live in my car.  Ya never know I guess.  I really did need to go back in the store, my daughter needed some unmentionables and I still had money.  And a loonie.

A man got to the carts the same time I did.  He remarked he had never seen anyone look so excited to pick up a cart.  I just smiled at him as I carefully placed the lovely loonie in the slot.  He would never get it; how long we had been apart.

I shopped some more then hit the check-out line again.  This time there was a very rude woman behind me.  I was glad she was behind me; for a little while.  She held up everyone with yakking on her cell phone and not unpacking her stuff.  She snarled at the guy behind her who tried to politely give her a nudge.  She threw everything on the belt in a rage with her phone glued to her ear. I could hear her abusing the person on the other end of the phone.I was through and packing my stuff when I realized the Quiche I bought wasn’t there.  Oh no.  It was on the other belt with the cranky lady’s stuff.  The female (not a lady in the least!) screeched at me when I took it off her belt.  I asked her if it was hers and she was really having a hard time letting me have my Quiche. Meanwhile the cashier didn’t look happy,and was trying to take the Quiche off the other lady’s bill and ring it up for me.  Then this lunatic started going through my bags! My groceries!   The cashier called security and I cowered behind my precious cart.  The lady had her melt down somewhere else and I took my Quiche, my cart and ran.

Made it to the car again and realized I forgot 2 things on the list.  Still hadn’t looked at it.  Not going shopping again for a while.  It took almost 3 hours.  My life is worth more than that.